By now it should be clear that every generation is unfairly stereotyped in some regard, but the Baby Boomers may actually get the shortest end of the stick. Generally regarded as anyone born between the years 1946-1964, it’s a lot tougher to paint them with a wide brush than it is for other generations. Most people hear “Boomer” and immediately think of grandparents, but the youngest are only turning 50 right now, while the oldest are approaching 70—and given the tectonic cultural shifts between the late 1940s and the 1970s, it’s almost as if there are two distinct generations in one. While some members are now becoming grandparents, younger ones may be caring for young children AND their own elderly parents. Additionally, the younger Boomers are far from retirement, and their earning/spending power is now peaking.

Richard Perez-Pena of the New York Times illustrates this dividing line well with the terms “Boomer Classic” and “Boomer Reboot.” Perez-Pena (a “reboot” himself) notes that Classic Boomers who were “raised in the immediate postwar years had more faith in their government, and an idealistic view of America,” while “late boomers have more in common with the jaded Generation X that followed: we had less idealism to spoil...no, I don’t remember where I was when Kennedy was killed and innocence died (I was an infant), but I sure remember where I was when Nixon resigned and cynicism reigned.”

Not only did this time span see one President’s assassination and another’s public disgrace, there was the war in Vietnam, the advent of the birth control pill in the 1960’s (for the younger Boomers, the backseat of the Cadillac suddenly got a lot less riskier!), legalized abortion, and the increased mainstreaming of drug culture. This fracturing means there is a lack of unifying characteristics, which makes the Boomers a notoriously difficult segment to penetrate. There simply isn’t a “one size fits all” approach to reaching this gang, so the trick is to identify the niches within the market, and refine your approach to zero in on those.

At somewhere around 75-80 million, the vastness of this generation alone makes it appealing for target-marketing, yet—incredibly—it is still overlooked. Now, this is rapidly changing; even as we speak companies are reacting to shifting demographics and economic conditions that favor older consumers, but it’s still far too common. Two big reason Boomers get ignored: A) people think that Boomers are already loyally entrenched with their favorite brands, and won’t change now, so they don’t even attempt to reach them, and B) they naively assume they only have to go after the younger crowd, and the older generations will line up and follow behind them.

As we’ll see, these are mistakes. Let’s look at why these assumptions are incorrect, and explore effective ways to tap into this generation’s massive buying power.

DON’T HARP ON THEIR AGE
Boomers know they’re aging, thanks, but they don’t want to hear about it (and they’ll thank you to stop bringing it up). For a good example of what NOT to do, look at this Chevy Cruze ad from 2011.

Where to start…first off, the “jokes” (and I use the term loosely) are all the same one: old folks can’t hear well! Haha! And this sometimes creates misunderstandings! Hahaha! Old people, am I right?

Granted, many of the actors here are too old to be Boomers…but only by a little, and do you really want to poke fun at something that’s going to be an issue for them in the near future? Remember, many are now caring for their elderly parents. Anyone living with their folks (or who’s in the market for an assisted-living community) is NOT laughing, I assure you. This ageist ad is totally tone deaf (sorry) and when it debuted it was a PR debacle for Chevrolet. It’s puzzling that someone thought this was a good idea—Boomers are buying a ton of cars right now, so trying to make Millennials (who aren’t exactly beating a path to the auto dealership, mind you) laugh at their expense is a poorly calculated move.

So, they may not want to be perceived as old, but they also don’t want to look like the older guy clinging to his past. Brent Bouchez is the founder of Agency Five-0, an agency specializing in reaching the 50+ demographic. He talks here to the NYT about how he stopped ordering Ketel One vodka at bars once they shifted their campaign to target younger consumers. Why? Because he didn’t want to “look like the 53 year old who’s trying to look 30.”

This is what we mean by older consumers not wanting to play “follow the leader” with their buying habits—this may work well for tech/digital purchases like phones or HD televisions, but I’ve got news for you if you think anyone over 50 is looking to the young folks for advice on what to drink (or a lot of other advice, either). It’s the same reason I stopped ordering Red Bull and vodka or Jaeger shots—I wanted to act my age, and didn’t want people to think I was stuck in college-mode. Also, Jaegermeister is a little gross.

BOOMERS LIKE THE GOOD STUFF–LUXURY!
While the 18-49 set is still the most coveted, the statistics are all trending in favor of Boomers being the most “valuable” generation. Nielsen Marketing projects they will make up half of the population by 2017, possess 70% of the nation’s disposable income, AND inherit roughly $15 trillion in the coming two decades. Roughly 67% say they plan to devote more time to their hobbies post-retirement.

Another telling stat: those 55 to 64 have an average income of $860 a month, compared to $460 for those aged 20 to 24. And not only do Boomers earn more money than their younger co-workers, they’re also a lot likelier to HAVE a job in the current economic climate; recent setbacks have overwhelmingly affected jobs for young people, with the unemployment rate for 20-24 year-olds at 14.2%…and 55-65 year-olds at a mere 6.3 percent.

This helps explain why Boomers are still driving auto purchases, and why they are the most favorable demo for luxury items. As older Boomers grow more comfortable with tech and their habits change, they’re spending money on electronic/digital wares, such as top-of-the-line smart phones and iPads (although they still remain highly resistant to video games). These are the customers who are willing to shell out for high-end goods. Some estimates claim that as much as 80% of luxury purchases are made by Boomers, and many of those expenditures fall within our next category…

THEY ARE JUST ITCHING TO GET ON THE ROAD/LEAVE ON A JET PLANE
Whether it’s hitting America’s highways in an RV or crossing the pond for a European adventure, Boomers have money and will travel. And just like a lot of younger travelers, they often prefer to go with a group of their peers. UNLIKE younger travelers, they aren’t looking to crash in a hostel or on a friend’s futon—they want all-inclusive, full package deals with tours of major landmarks and sights, transportation and accommodation, cooking lessons for the local cuisine…the list goes on.

They also want to travel to exotic, far-away lands, and tackle physically challenging landscapes, because they realize that the time when their legs can still handle trips like this is growing short; this is why places like Machu Picchu and Mt. Kilimanjaro are seeing more visitors from this generation. Another draw is places they fear are disappearing—rainforest treks and even Arctic cruises are being frequented by increasing numbers of the 50 and up crowd, mindful that the trees and icebergs won’t be there forever. Vacations like these shouldn’t be too surprising, seeing as this is the same generation that made the penniless, post-collegiate backpacking tour through Europe or Asia an almost mandatory rite of passage.

However…even though they want an adventure and a challenge, they still want their luxuries. Preferred Hotel Group offers a popular stay in South Africa’s Sanbona Wildlife Reserve that features “luxury tents” complete with mini-bars, air-conditioning, Wi-Fi, electronic safes, showers, and even a “spa tent” with a hot tub and masseuse. The travel industry is very aware of its reliance on Boomer business, and are particularly savvy at tailoring package deals to them. For example, many are offering shorter cruises and tours along the lines of 7-10 days (rather than 3 weeks) to better fit the schedule of fifty and sixty-somethings who are still hard at work.

THEY WANT TO PUMP (THEMSELVES) UP
For the Silent Generation–that is, the Boomer’s parents–“taking some exercise” meant having a cigarette while briskly walking to the tavern to “lift” a few highballs. Baby Boomers are way more educated about the link between exercise and quality/length of life, so fitness products, gym memberships, and yoga classes are a big part of their lives.  Gym chains like ‘Nifty After Fifty’ are capitalizing on this by offering specialized workouts for the 50 and up crowd. Staying fit is the closest thing there is to a fountain of youth, so we know how important that can be to this group. They also love the trappings of fitness: weight-lifting gloves, spandex biking suits, yoga outfits, track suits–to them, these things say: “I’m still virile and energetic” (although location matters: a man in his fifties wearing a track suit in New Jersey says: “I am potentially involved in organized crime”).

This isn’t limited to physical exercise, though–Boomers see fitness as just one part of the broader spectrum of wellness and attractive physical appearance, so this applies to any sort of rejuvenating product, be it mental or physical. Unsurprisingly, they spend a lot on exfoliating scrubs, teeth-whitening products/treatments, moisturizing creams, and other “revitalizing” beauty products.

Now this may be hard to believe, but MacDowell is 54 (I know, right?), and using a relatable model is important for this audience. Remember how we said some companies only target young people, hoping the older folks will “follow the leader?” Well with a product like this, the opposite is true: if young women see Andie MacDowell looking that good, they (ideally) figure “well, it’s working for her, and she’s (ten/twenty/twenty-five) years older than me!” The specific details about active ingredients and what the cream does step-by-step don’t hurt either; Boomers prefer advertisers who “show their work” rather than simply make extravagant claims.

If the travel industry is reaching out to Boomers, then the fashion industry has lost their phone numbers. Still dominated by stick-think 20 year-old models, Baby Boomers feel very neglected in this regard. Some clothing lines DO go after their dollars, however. Take a look at Demi Moore in these ads for Ann Taylor. 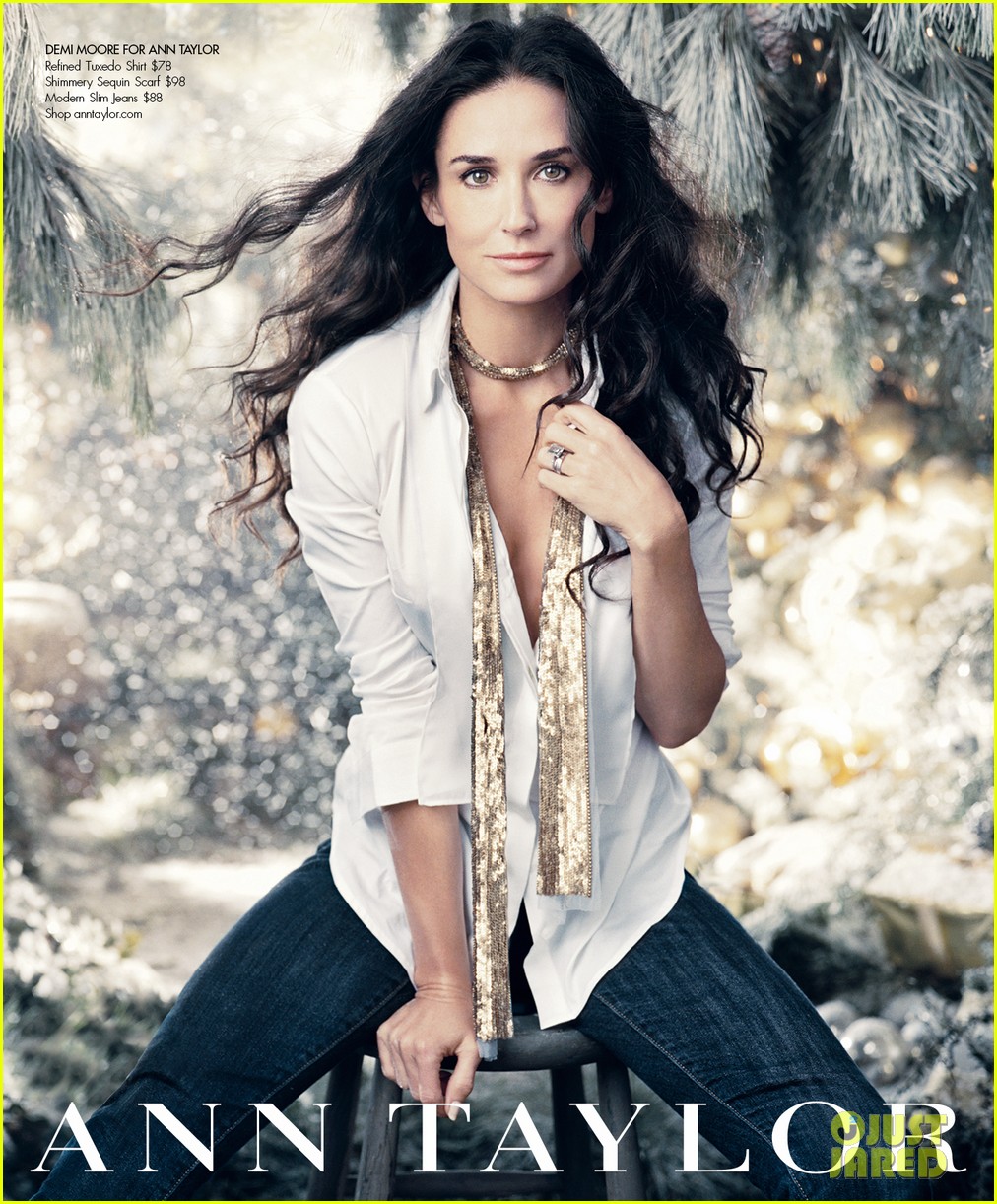 Again, we’ve got a recognizable and beautiful woman in her fifties as the face of line–and many Boomers appreciate the effort, especially in an industry where they have been made to feel almost invisible.

A LOT OF THEM ARE SINGLE…AND SURFING*
We mentioned how Boomers are growing more comfortable online (according to Forbes, they spend 7 billion online annually). Combined with the US Census data telling us 31% of those 50 to 64 are widowed/divorced/unmarried, and it’s easy to see why the growing dating services industry is gaining ground with this generation. Sites like Silver Singles, OurTime and Senior Friend Finder specifically target this age group, and thrive. So while they continue to log on and sign up in growing numbers (and with growing frequency), the online dating business has massive potential for growth in this area.

The Boomers changed marketing forever as teenagers and 20-somethings, and they are continuing to change the rules as they age and develop new interests and concerns. Look for even more industries to begin competing for their dollars, as obsessing over the 18-35 demographic (to the exclusion of any other strategy, at least) slowly becomes a thing of the past.

*Remember when people used to say “surfing” the internet?